For a second consecutive year, Colorado sculptor Christine Knapp delights Sculpturewalk patrons with one of her superb animal bronzes.

Last year she displayed two of her spectacularly life-like bronzes here. Big Flirt was a loveable, fun loving black bear exuding pleasure and contentment, sitting legs splayed on its rump relishing the moment. Her other piece from last year echoes this year’s entry but from an opposite perspective.

Fawned Memories depicted a mother elk and her two young offspring. Mountain Love has the same family dynamic – a mother and two little ones – but it is the opposite side of the predator/prey spectrum, a female mountain lion and her cubs.

The mother sits impassively on her haunches, muscled, alert and looking into the middle distance. Knapp captures the sinuous, muscular beauty of a mother attentive to any threat or danger, wary and hyper-vigilant. Her tail protectively encircles the cub resting at her back haunches. His/her sibling nuzzles their mom’s breast, playfully affectionate.

There are lovely moods captured in all three; Knapp’s skill and talent projects those differing feelings completely while binding them collectively into a visually stunning whole. Mountain Love displays the essence of family, love and the wildness inherent in nature in glorious, detailed bronze.

Knapp has been sculpting professionally for nearly 30 years. Specializing in figurative animal (and human) studies, many of her works – like the sculptures she has displayed to date here – replicate species she has observed and photographed extensively in the mountains around her home.

Her works range in size from miniature to monumental, all incredibly life-like and emotive. She has studied with renowned painters and sculptors over the years to further her talent, traveled extensively to capture the essence of a subject first-hand and has her sculptures proudly displayed in private and public collections around the globe. 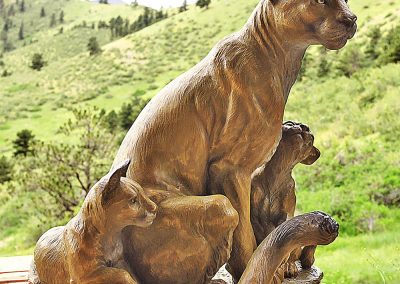 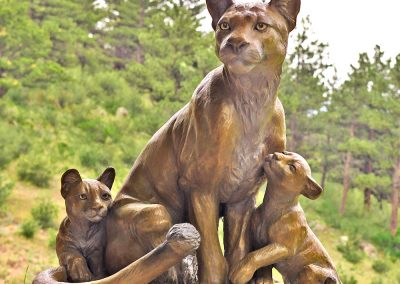